to something, I am really committed and I almost become obsessed about it.

And that is why I have been so reluctant to commit to something like a race or a triathlon or marriage (JK on the marriage).

Ann Dee has been trying to talk me into training for a triathlon for months and I kept putting her off. She is even having a fake triathlon in few weeks but darn it, I'll be out of town. I'm pretty sure Megan is planning on participating.

My best argument for not committing was that it wasn't intuitive and if I pushed myself too hard with exercise, I wouldn't enjoy it and then I'd quit altogether. After all, that is what the book says about exercise - you gotta enjoy it. I've used this argument with myself, Ann Dee, my personal trainer, and anyone else who thinks a goal like this would be good for my mental health.

My personal trainer has been pushing me with my cardio and I've been pretty resistant until recently. Do you remember that I'm an advanced client? In the last 4-5 months I've been swimming quite a bit and I've started to jog a bit too. I also like to ride my bicycle. So last week when he told me he thought I should train for a sprint triathlon, I gave him another lecture using the same argument.

I was in the office of J (my dietician). She's the one who coaches me with all this intuitive eating stuff. We were talking about food and cooking and ways to add veges to things and yada yada. When out of nowhere she blurts ... "you should do a sprint triathlon." Huh? She was supposed to be on my side. I looked at her with a blank face. Now what was I supposed to do. I started into my argument and she just said ... "I think you are using that as an excuse. You need to push yourself a bit more." She called me out on my bull crap and she was right. So here I am.

I found a 22 week training program online - again I'm not going to push myself TOO hard. It is called "couch to sprint." I even decided to start on week three and I have increased my running (walk/jog) from what it says I should be doing. Aren't you proud?

I'm going to do this triathlon in November (giving myself plenty of time) and I'm blogging about this so I can hold myself accountable because you'll all be dying to know if I make my goal. 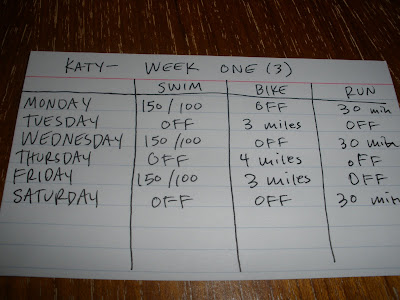 And so far, I've been on track and to be honest it feels pretty good.

I have a few thoughts about Golds gym and swimming pools but I'll save that for another post.
Posted by Katy at 8:50 PM

I did a sprint triathlon two summers ago in Logan and it was AWESOME. Well, awful, really, but the feeling of being done was amazing. I'm doing one again this summer. The only advice I can give you is get a good bike. My bike was too big for me and by the 11th mile my whole body hurt beyond description. So get a good bike! And good luck!

Um...I told you so. :) Katy isn't Katy without a good goal to work towards. I love it. You will rock it out. Now we can run (or walk) when you come out to visit.

I'm impressed. I have been giving excuses to keep me out of sprint tri's for years now. I think I still will give those excuses and just sit comfortably by and watch the rest of you accomplish something I never will do. Good luck with the training.

Good luck...seriously. I'm impressed. My idea of a triathalon is chasing my kids around the neighborhood, dragging scooters and bikes back to the house, and bathing them all. That counts, right?

Everything about this is great, except for when your schedule means that we don't get to hang out.

I'm just putting it out there.

I was just walking home from the zoo thinking about how tired I was and how I'm going to be crap in the fake triathlon and maybe I won't do it. THEN it happened I come home and read your blog. Katy you are an inspiration.

Oh, the Universe can be compelling sometimes, can't it?

And you get even more props for working out at Gold's in the P-town.

Good for you. You will feel like you can do anything when you finish. I will try for the November race with you...where is it? Or did you already say? I skimmed.