I had two major ligaments repaired in my knee. 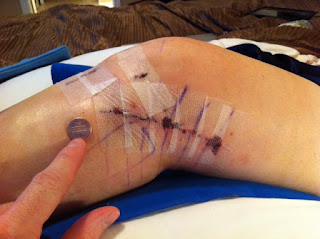 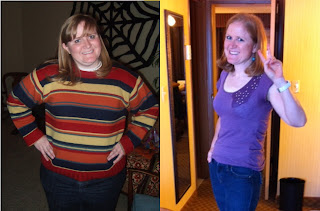 So this triathlon was kind of a big deal for me. I wanted to beat my previous times in each of the three events and I sorta did ... 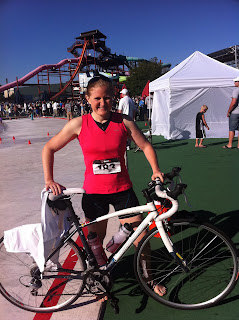 The weight loss was going to make it easier and the knee was going to make it harder. I took an ibuprofen before the race and was able to run. The knee definitely hurt especially because they had us run up and down a bunch of the hills behind the state mental hospital and that was not good for my knee. Running and biking and swimming have been so much easier and enjoyable now that I'm carrying 70+ less on my frame.
These boys (including baby Milo who is behind Van) and their mom came to support me. Although after the bike they were waiting for me to cross the timing mat but I got confused and missed the mat and just hopped the fence so I could go directly to the pool. So they waited and waited for me and never got to see me jump in the pool ... but they did get to see me run out and to the finish line. 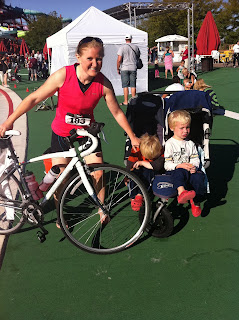 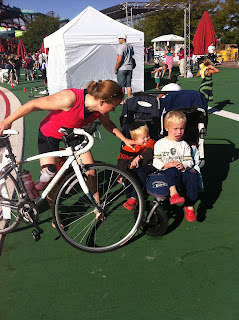 I did well on the bike and I really tried to push it. As I was finishing and turning back into the park, I saw a tall man walking along Seven Peaks Drive in a red baseball hat, listening to his ipod. I yelled out at Larry who wasn't even there to cheer me on but just happened to be on his regular morning walk. It was sorta like I was cheering him on.
Here are my times: 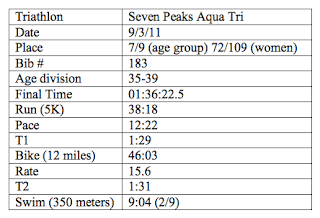 Somehow, even though I missed the mat, they came up with a swim time for me. I did really well on the swim although it was quite annoying because I couldn't really get in a rhythm with the narrow lanes and all the bodies in my way. I literally passed at least 10 people and no one passed me. So although I was slower on the run, I made up some time on the bike and swim and passed quite a few people.
Here are my other sprint triathlon times ... the 5K on the Telos triathlon is much easier than this one and the bike ride is only 10 miles, not 12 so ... 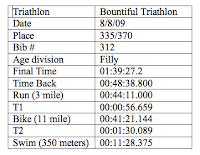 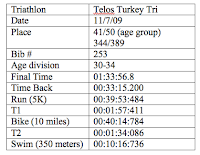 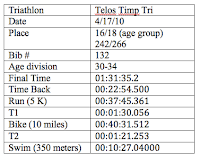 My favorite part of the race was as I turned on to Slate Canyon Drive and at the top of the hill I looked out as the sun was coming up. I saw dozens of bikers pushing up the hill with the fields of gold behind them. It was beautiful ... I wish I could have taken a picture but I did take a mental picture that I hope never leaves me. I'm so excited for more beauty and fun in my future!
Posted by Katy at 9:13 PM

That is awesome!! So impressed you did that! I wish I had the self-discipline to do a triathlon. Also you look amazing! Would love to hear more about what you eat right now (especially how you've cut out the flour). xoxo, M

wow. you're amazing. I think I would have retired after knee surgery, but not you! Plus the 70 lbs! I, too, would love to know what you eat--you look amazing and have earned it with all your hard work! How about I throw in a few more ! !!!

Go Katy! That is awesome!

Wow Katy! Congratulations on all of it. You really are awesome.

Also, what do you eat if you don't eat flour or sugar? That's basically my entire diet.

Holy cow! I tried it for a few months and lost 20 lbs, but you persevere! Have you added some of the flour and sugar back in or not? I'm ready to go back on it now if I can get results like that, I just plateaued, so if you have any suggestions, please do share. Congrats again, you're amazing!

You are amazing! Good job! I love ya!