Wasn't too bad - sure glad I trained 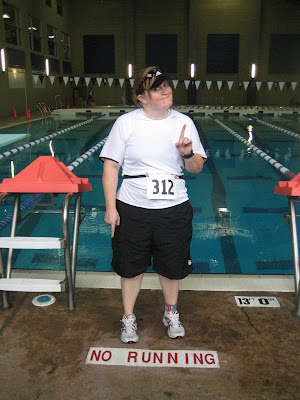 Friday night Ann Dee, Cameron, Stacy, Van, and Asher and I slept at Leslie's house so we could avoid the drive in the morning. Van loved waking up at Leslie's house although he kept asking where she was. I think he knew he was going to have a fun day cause he was super happy that morning.

Preparation on Saturday morning:
RUN
Lets just say I was really glad that AD & SD stayed with me. For the first bit we were in dead last. In fact as we crossed through an intersection these cops were directing traffic and the one cop yelled to the other, "that should be the last until the bikes." I yelled back, "thanks for pointing that out." He waited a few seconds and yelled back, "you're welcome."

I had my watch all set so we could run 10 minutes and walk 1 minute but I felt good enough that I wanted to try and run the whole thing. AD & SD told me stories so I didn't have to talk but I could listen and keep my mind off the pain. It helped and I made it without walking at all. We even passed a few other stragglers. We had a good chat for a bit with a lady named Julietta. I was really glad to get this part over with first. I actually looked forward to the next two events.

BIKE
It was so nice to hop on my new road bike and start the ride. It helped me so much mentally to have done the route the weekend before so I knew it wasn't going to be very hilly or hard. AD had a mountain bike so that part was really hard for her. We didn't keep together as well during the ride. It was kind of rude for me to leave AD on the bike portion after she had stayed back for me during the run. Running is her strong point and she could have kicked my butt. I wasn't that far ahead - only like a minute or two. In fact once I stripped down to my swim suit and started running to the pool I saw AD and SD in the transition area right behind me. 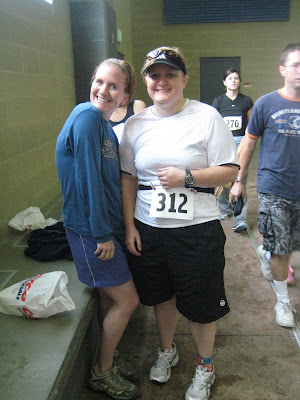 I ran to the pool in my suit and easily got my cap and goggles on. I hopped in.

SWIM
This was nice. I passed a lot of people and not one person passed me. I think I paced myself well. I didn't stop to rest and was able to do free style the whole way. My time wasn't as good as I thought it would be but I did ok nonetheless. I was glad this part was last, even though Casey and Tim threatened to leave me some pee in the pool. It is a bit annoying to have so many other swimmers around but I just kept going and tried not the kick them in the face or get kicked in the face.

Cam finished well before all of us as did Casey and Tim. SD and AD were only two minutes behind me. Aaron, Chris, Gary, and Ethan (some of SD's friends) did a great job too.

It was so much fun that I'm committing to you all (anyone who follows my blog) that I will do another triathlon before the end of the year. It was nice to be able to say I was 32 even though in less than 24 hours I would be 33. 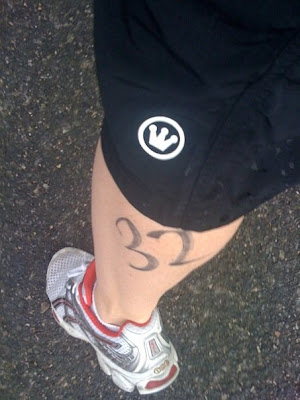 After a shower, we had a little birthday lunch at Sandy's house and I got to wear this bday hat and eat a yummy bday ice cream pie. Van got most of it in his mouth and only a little on the outside. 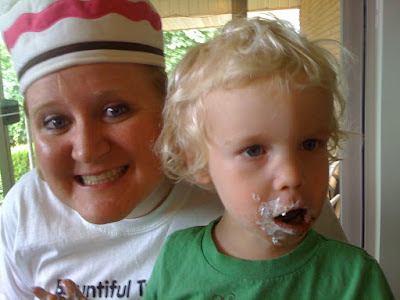 By the way - I will not report so many details in the future. Just for this first experience. Thanks for all the support friends! 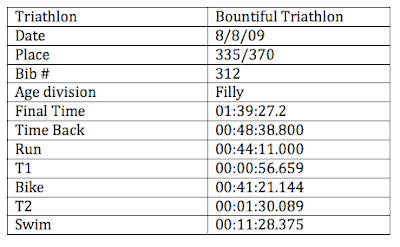 Congratulations. That is a huge accomplishment!

BTW I found you through CJ a while back and I find your cooking for one hilarious!

I knew your brother Dan way back when.

Congratulations! I'm glad to hear it all went well!

What a way to usher in the next birthday! Awesome. You are inspiring. I almost feel like I might want to try this thing call a triathlon. Almost. But then as quick as that it is gone. Nope, not feeling it now.

Congratulations! I think that's awesome. After my first triathlon the first words out of my mouth were "never again. never ever again." So you're clearly awesome.

By the way - I want to thank Eric and Ryan for their professional and personal training. It helped immensely.

That is so awesome! Congrats on finishing! And Happy Birthday!

WAY TO GO KTB!!! Sounds like everything went great. I liked hearing about each event and how it went. Hope you had a very Happy Birthday!

You freaking rock. Seriously. My hero. I will never do that, so thanks for letting me experience it through you!

So, so, so great! Seriously.

And why are you now better friends with my roommate than with me, eh?

I'm proud. Way proud. And how about the Turkey Tri for sure? I will do my best to be there.

Congrats! I am proud of you. I have little to no motivation to enter a triathalon, so good for you! You look great!