Three things ... to do with memories. 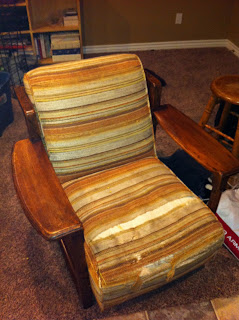 I was at my brother's house a couple of weeks ago and I saw this chair in his basement and a flood of memories from my childhood hit me ... that is all I have to say about that one. 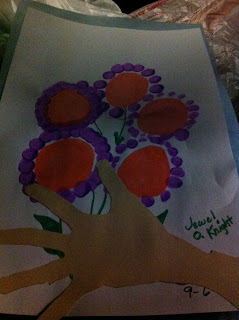 This is some art that my mom did at the Aspen Center for people with Alzheimer's ... I wish her memory was in tact. I miss her. 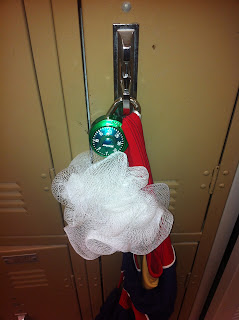 A month or so ago I went swimming at the indoor pool in the Richard's building at BYU on my lunch hour. I've been doing this consistently about twice a week for a few years now. I have a rental locker and I've used the same padlock the whole time. My routine is to lock my clothes and valuables in a big locker while I swim. I take a clean pair of underwear and a towel along with my shower supplies over to the shower so that when I'm finished swimming, I can go directly to the shower. After my shower, I dry off, put on my underwear and then go unlock the big locker and finish getting dressed and ready. Well this particular day for some reason, I forgot my combination. I sat there for 20 minutes (or more) trying every combination of the three numbers I was certain made up the combination ... but it didn't open. I had saved the combination in my phone so I could look it up in such situations. However, my phone was locked in the locker ... so I stood there in my underwear with a towel on my head trying and trying to remember. There were numerous ladies trying to help me and give me moral support. I felt dumb and embarrassed. There I was, half naked, with a towel on my head and feeling quite helpless. I was by far the youngest of all the ladies in that section of the locker room and I was concerned I was showing signs of "early on-set" Alzheimer's disease. One of ladies went to the issue desk and came back telling me that my only option at this point was to have them cut the lock. So that is what they did and I have subsequently bought a new pad lock. I almost published the combination with this post for future predicaments like this but then why have a lock in the first place?

That chair was my favorite.

I hate it when I get a brain blockage. Remembering numbers and names are not easy for me. You could write your combo down by your desk so that you could call one of your techs to give you a hint next time your brain decides to pick and choose the memories it remembers.