Don't worry a rant is coming. I'm working on it.

Only Kristi wanted to see my bird list so I'll just email her a copy.

Erica - someday you will see BDAA footage. I promise.

Another Cooking for One episode is coming ... in fact I have the footage from my new episode and just need to edit it and post. Holly and I shot this one a few months ago. 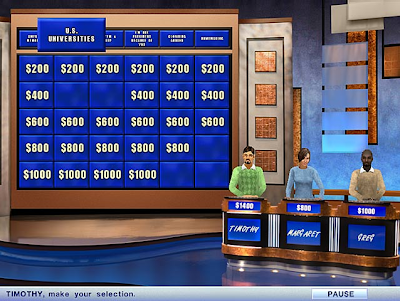 YES - that Holly. The one that mentioned how I didn't know the word "word" while playing Jeopardy on the computer back in 1993 or somewhere around that time. But she didn't either. We were both having a brain fart.

Yes that did happen. I remember that I always named my contestant Hugh Jass cause I thought it was sooo funny. You know - Bart Simpson style. I also remember writing a script for an assembly in high school and included that joke. The principal that reviewed the script missed it so our inappropriate joke passed. Ha!

I'm going to start by giving you my take on the 25 random things you all said about me - as I said I would and as Lezlie wants me to. This was item #2.
Posted by Katy at 7:14 AM